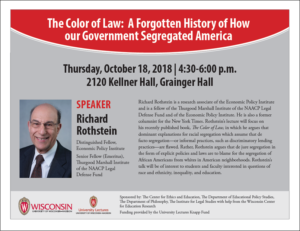 Richard Rothstein is a research associate of the Economic Policy Institute and is a fellow of the Thurgood Marshall Institute of the NAACP Legal Defense Fund and of the Economic Policy Institute. He is also a former columnist for the New York Times. Rothstein’s lecture will focus on his recently published book, The Color of Law, in which he argues that dominant explanations for racial segregation which assume that de facto segregation—or informal practices, such as discriminatory lending practices—are flawed. Rather, Rothstein argues that de jure segregation in the form of explicit policies and laws are to blame for the segregation of African Americans from whites in American neighborhoods. Rothstein’s talk will be of interest to students and faculty interested in questions of race and ethnicity, inequality, and education.

COOKIE NOTICE. We use cookies on this site to enhance your experience and improve our marketing efforts. By continuing to browse without changing your browser settings to block or delete cookies, you agree to the storing of cookies and related technologies on your device. UW-Madison Privacy NoticeGOT IT!

This website uses cookies to improve your experience while you navigate through the website. Out of these cookies, the cookies that are categorized as necessary are stored on your browser as they are essential for the working of basic functionalities of the website. We also use third-party cookies that help us analyze and understand how you use this website. These cookies will be stored in your browser only with your consent. You also have the option to opt-out of these cookies. But opting out of some of these cookies may have an effect on your browsing experience.
Necessary Always Enabled
Necessary cookies are absolutely essential for the website to function properly. This category only includes cookies that ensures basic functionalities and security features of the website. These cookies do not store any personal information.
Non-necessary
Any cookies that may not be particularly necessary for the website to function and is used specifically to collect user personal data via analytics, ads, other embedded contents are termed as non-necessary cookies. It is mandatory to procure user consent prior to running these cookies on your website.
SAVE & ACCEPT